The symbolism found on this trump card is primarily drawn from old cartomancy decks, alchemy, metaphysics and western occultism.

Which Historical Deck of Tarot Cards Influenced The Design of The Fool Card Symbols?

Historically, the Fool is depicted in one of two iconographic traditions, either as a jester or a ragged beggar.

When it came to creating a deck of divination, artists typically turned to historical Tarot decks such as the Tarot de Marseille as a starting point when recreating the major arcana. Pamela Colman Smith was no exception. In the image above, we see the Fool carrying a satchel over his right shoulder and an animal (cat?) leaping on him.

What is The Meaning of The Mountains? And Why Is The Fool About to Walk Off a Cliff?

Mountains tend to represent obstacles to overcome in a Tarot reading. The closer the mountain, the more immediate the danger. The Fool is literally standing on top of a mountain cliff, surrounded by even more scary jagged mountain peaks. The danger is imminent, his next step could result in him plunging to his death.

A.E. Waite writes, “The edge which opens on the depth has no terror; it is as if angels were waiting to uphold him, if it came about that he leaped from the height.” [Pictorial Key to the Tarot]

Essentially the next step is a leap of faith. As Waite continues, “The sun, which shines behind him, knows whence he came, whither he is going, and how he will return by another path after many days. he is the spirit in search of experience.”

The Fool seeks enlightenment, and he trusts the angels to watch over him as he leaps into the unknown. This is spirit expanding.

At a deeper level, the Fool represents the state of the first emanation. He is the primary aspect of universal consciousness, also called super-consciousness. He is the cosmic spark of Life-Breath, just before it descends into the abyss of manifestation.

The number of this card is 0. Zero suggests nothingness, oneness prior to coming into existence. This is the level of spiritual consciousness or vibration that saints and mystics refer to as Oneness or Union with God.

Where is The Fool Card Placed in The Major Arcana?

The exact placement of the Fool card in the Major Arcana, was hotly debated by occultists throughout the 19th century.

Traditionally, the Fool card was placed at the end of the trumps, because it was unnumbered and thus stood for something separate. The Fool was always treated differently.

Even though Waite seem undecided, he allocated the number 0 to The Fool, which encourages us to place the Fool ahead of Trump 1, The Magician. However, in his book The Pictorial Key to the Tarot, he placed the Fool between Judgement and the World cards in his commentary on the card meanings.

Nowadays, the Fool tends to be placed at the very beginning of the Tarot deck. The Fools Journey has becomes synonymous with life’s journey, and it begins with packing our bag like the Fool and leaving home, and finishes when we experience The World.

What is The Symbolism of The Fool’s Tunic and Red Feather?

Waite writes, “with light step, as if earth and its tramels had little power to restrain him, a young man in gorgeous vestments pauses at the brink of a precipice among great heights of the world”.

As Waite is quoted, in Israel Regardie’s The Complete Golden Dawn System of Magic:

“At the meeting point of the arms – in the middle of the Cosmic Cross – is placed the Wheel or Circle of Spirit, having eight radii, proceeding from the sacred letter SHIN. The doctrine of the Rosy Cross in the Grade of Adeptus Minor is here formulated and symbolised, with intimations of mysteries which lie beyond the Grade.”

The Fool wears a belt bearing the astrological symbol of the sun, a circle with dot in the middle. As the belt must extend around his waist, we must assume that there are 12 in total, which correspond to the 12 Zodiac signs. Similar iconography can be found in the wreath around the child’s head in the Sun card.

The Fool wears a red feather in his hair. A similar red feather also appears in the Death and The Sun, linking all three cards together. The feather marks the stages of moving through the three degrees of Freemasonry, from Entered Apprentice, to Fellowcraft, and Master Mason. The Fool is emergence, Death is rebirth and the Sun is enlightenment.

What Is The Meaning of The White Dog In The Fool Card?

A white dog yaps at the heel of The Fool, warning him of the impending danger ahead.

By including a dog in the design, Pamela kept within the tradition of the Marseilles deck. The implication here being that the animal kingdom are messengers of spirit. Black cats, dogs and toads were known as witches familiars, that is low-ranking demon that assumed any animal shape.

The dog in this card has been depicted in white, which is symbolic of purity and god-force spirit. While we are reminded that it is good to raise our eyes to Heaven for guidance, we are reminded to pay attention to the signs down here on Earth too.

Worth Reading: Animal Symbolism, what it means when a bird, animal or insect acts unusually around you.

What Is The Symbolism of The White Flower In The Fool Card?

The Fool holds a white flower in his left hand, assumed to be a rose. In alchemy, white reflects purity and so the white rose becomes symbolic of innocence and optimism.

What Is The Fool Carrying in His Bag?

In short, we do not know what the Fool carries in his satchel. The load seems light, symbolic of carrying little ’emotional baggage’. This is a youth, embarking on life, before the hard knocks of life set in.

Some authors propose that the Fool is carrying the four symbols of the tarot suit in his bag: the wand, cup, sword and pentacle. The suggestion is that he is prepared practically for the hike ahead. The Fool’s flamboyant pose, suggests his expectations may not match the reality to come. This could be a college graduate about to start his first serious job. He has no idea yet, how little he knows.

The Ultimate Guide to The Fool Symbols 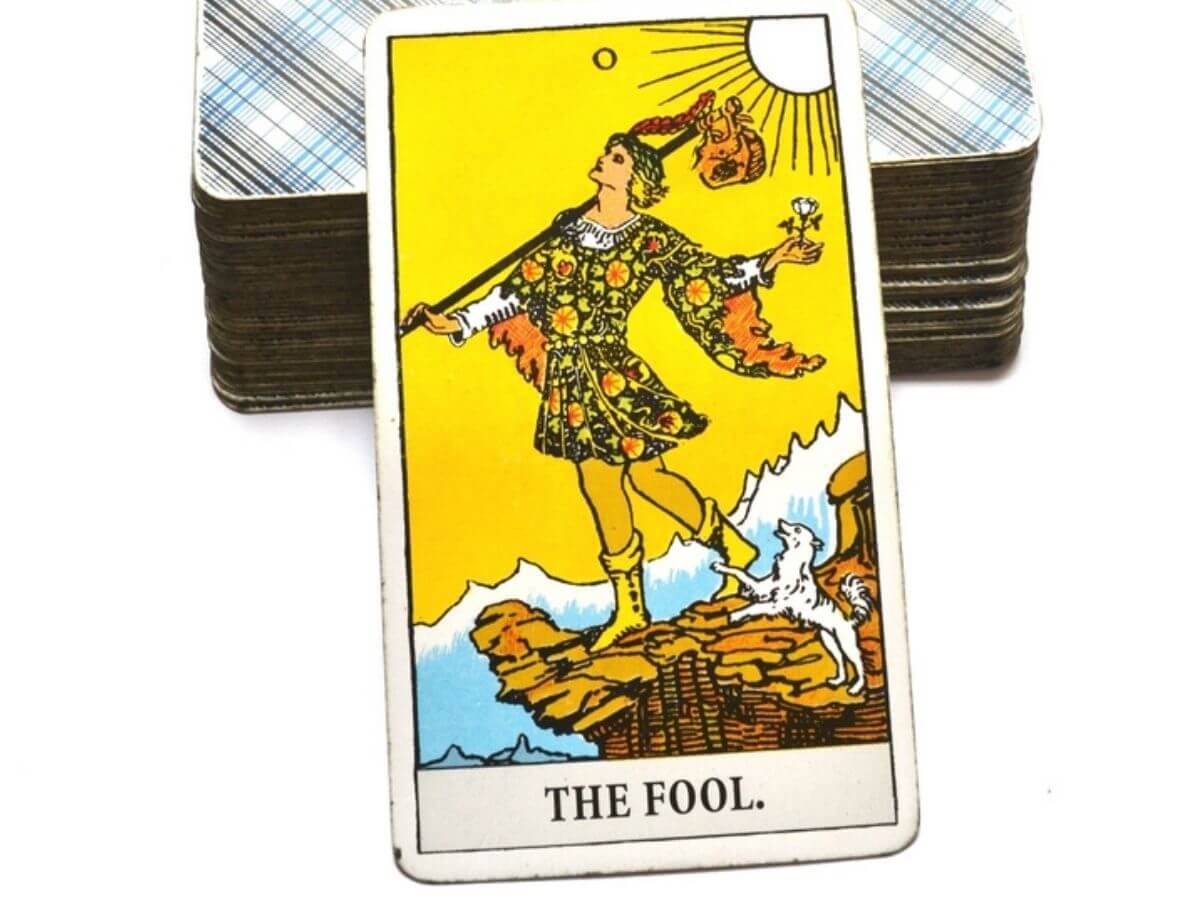