The symbolism found on this card is primarily drawn from mythology, metaphysics and western occultism.

“A disdainful man looks after two retreating and dejected figures. Their swords lie upon the ground. He carries two others on his left shoulder, and a third sword is in his right hand, point to earth. He is the master in possession of the field.”

A.E.Waite
The Original Rider Waite Pictorial Key To The Tarot

Imagery of the 5 of Swords: The symbol meanings, legends, metaphors and allegory

Is The Champion Smiling or Smirking in The Five of Swords?

A man watches as his opponents walk away in defeat. He smiles as he gathers the fallen swords, the spoils of his victory. This could be the final scene in a Shakespearean play, and Pamela Colman-Smith’s theater background is very much apparent in the imagery of this card.

The victor may be smiling because he is pleased with himself, after all this card can symbolize fighting for what you want.

Others see him as a smirking scoundrel, who takes pleasure in embarrassing other people.

There is no right or wrong answer here. This is one of those cards in the Rider Waite deck, that can only be interpreted by which man you identify with. At various times in your life, you may identify with the winner and at other times, the loser. Similarly in the Six of Pentacles, you will identify with the benefactor who is giving, or the poor person who is receiving help.

A.E. Waite description says the main protagonist is ‘disdainful’, but the artist’s interpretation is less definitive. Waite gave Smith more freedom with the Pip cards, because he was more concerned with the representation of the major arcana cards.

What is The Meaning of The Stormy Sky?

Clouds have a variety of meanings in Tarot, depending on their color and type. They tend to reflect the central message or theme of the card.

The clouds in the 5 of Swords are ragged, like a sword has ripped through them. The aggressive theme of this card, is thus reflected in the sky. However, the clouds are breaking which means that the storm is passing, just as the fight too is over.

What do The Mountains and Sea Symbolize in The Five of Swords?

The sea in this Tarot card is relatively calm, a further confirmation that the storm has passed and calmness is restored. In fact, it looks very similar to the sea in the Two of Swords, where the sea reflects the woman’s inner composure.

The wind creates a slight ripple on the water surface, reminding us that swords are ruled by the element Air.

Notice how the victor’s clothes are blown to the right, and yet the person in the middle-ground, his hair is blown to the left. This may be a subtle reference to wind blowing in ‘two directions’, or a difference of opinion.

Beyond the sea, we see mountains in the background. Mountains tend to represent ‘obstacles’ to overcome in a Tarot reading. The closer the mountain, the more immediate the problem. In this card, the mountains are some distance away, representing battles for another day. What is won today, should be celebrated today.

What Sphere Does The Five of Swords Represent in Qabalah?

According to Kabbalah, God (Ein Sof) made manifestations. Each manifestation is called a Sephirah (plural, Sephirot). Fives in Tarot connect to the fifth Sephirah, called Geburah, also spelled Gevurah. Geburah is translated as strength.

According to the Hermetic Order of the Golden Dawn, Khamael (Camael) is the archangel who resides over Geburah. Camael is the archangel of strength, courage and war in Jewish and Christian mythology and angelology. The choir of angels that reside in the sphere are the Seraphim.

The Ultimate Guide to Five of Swords Symbols 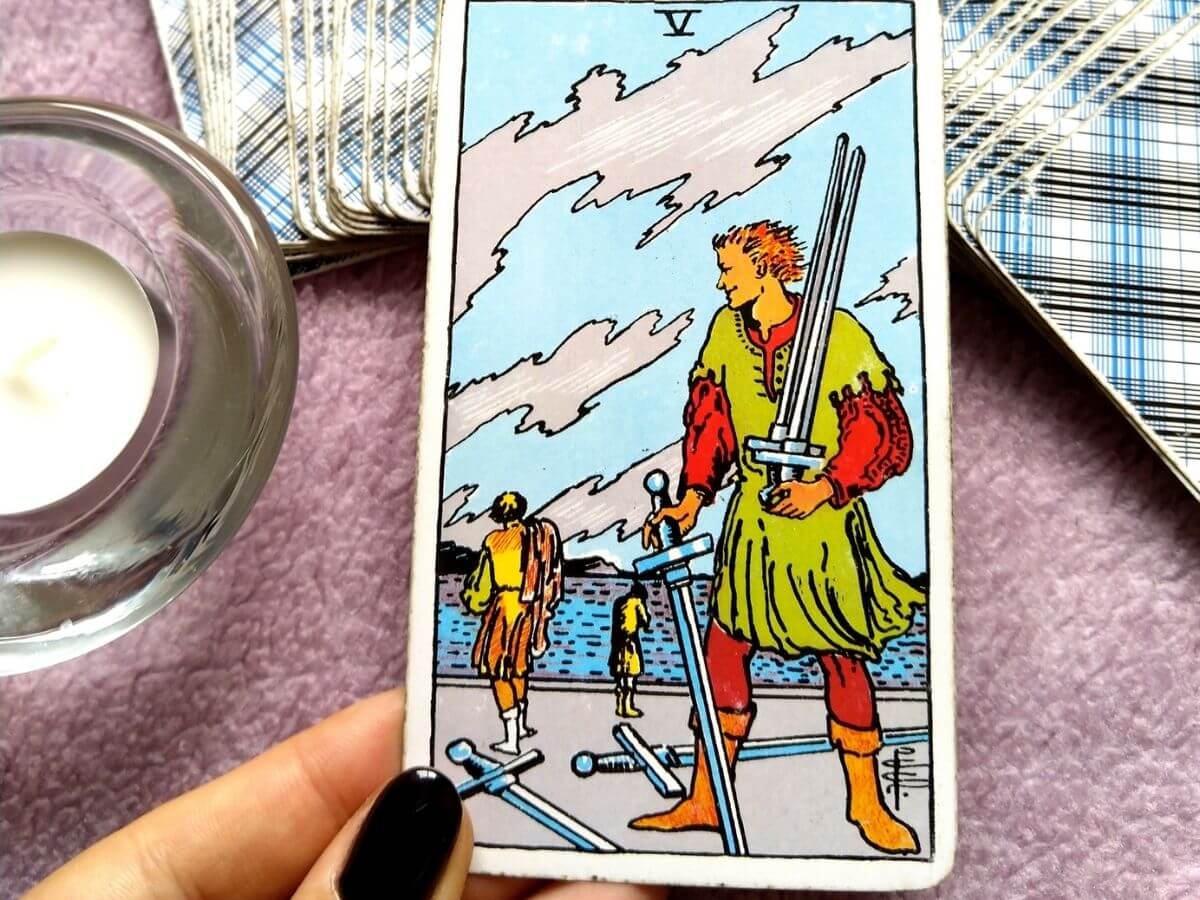