The symbolism found on this card is primarily drawn from Christianity and western occultism.

What Does The Church Symbolize in The Five of Pentacles?

A crippled leper, identified by the bell around his neck, and an impoverish woman dressed in rags, stagger past a church in a snowstorm. For Arthur Waite, the card depicted material trouble and destitution. He describes the figures as “mendicants”, which means professional beggars.

However, Waite’s use of the word mendicants may contain a hidden reference to religion. Mendicant orders are, primarily Christian orders such as Franciscan and Dominican that have adopted a lifestyle of poverty, traveling from one place to the next for the purpose of preaching and evangelization.

The artist, Pamela Colman Smith, chose to make the church window a center piece in this card, thus endowing the message with spiritual meaning. Since her father died in 1899, Smith had gradually moved closer towards the comfort and community of the Catholic Church. Perhaps her new enlightenment and faith is depicted in the 5 of Pentacles. The glowing stained glass window acts as a centerpiece of shining hope and salvation. The layout of the coins in the window seem to form the Tree of Life, and branches of personal growth.

We are reminded here, of an earlier article Smith wrote for The Craftsman Journal (1908, Should The Art Student Think?). In this article, she advised art students to look beyond the appearance of a person in order to see their true spirit. She spoke of “dirty people seen in a crowd,” and advised students “not to remember only the dirt, but the great spirit that is in them all, and the power they represent …Ugliness is beauty, but with a difference, a nobleness that speaks through all the hard crust of convention.”

What is The Meaning of The Snow in The Five of Pentacles?

The snow creates an atmosphere, this being the coldest, and darkest day of the year. It speaks to the winter solstice and cycles of time. This is the moment of hitting rock bottom, and where inevitably, the only way is up from here. Just as the Earth creeps past the point of the winter solstice, we count on spring’s return like clockwork every year.

In cartomancy, snow is also a reference to being ‘left out in the cold’; but it can also be associated with a ‘fresh start’.

What do Crutches Symbolize in This Tarot Card?

The beggar supports himself on crutches. Within a Tarot reading, the presence of crutches means that the reader requires some sort of support. Generally, the support required is emotional, although occasionally it may some other sort of practical or financial assistance.

What Sphere Does The 5 of Pentacles Represent in Qabalah?

According to Kabbalah, God (Ein Sof) made manifestations. Each manifestation is called a Sephirah (plural, Sephirot). Fives in Tarot connect to the fifth Sephirah, called Geburah, also spelled Gevurah. Geburah is translated as strength.

According to the Hermetic Order of the Golden Dawn, Khamael (Camael) is the archangel who resides over Geburah. Camael is the archangel of strength, courage and war in Jewish and Christian mythology and angelology. The choir of angels that reside in the sphere are the Seraphim.

The Ultimate Guide to Five of Pentacles Symbols 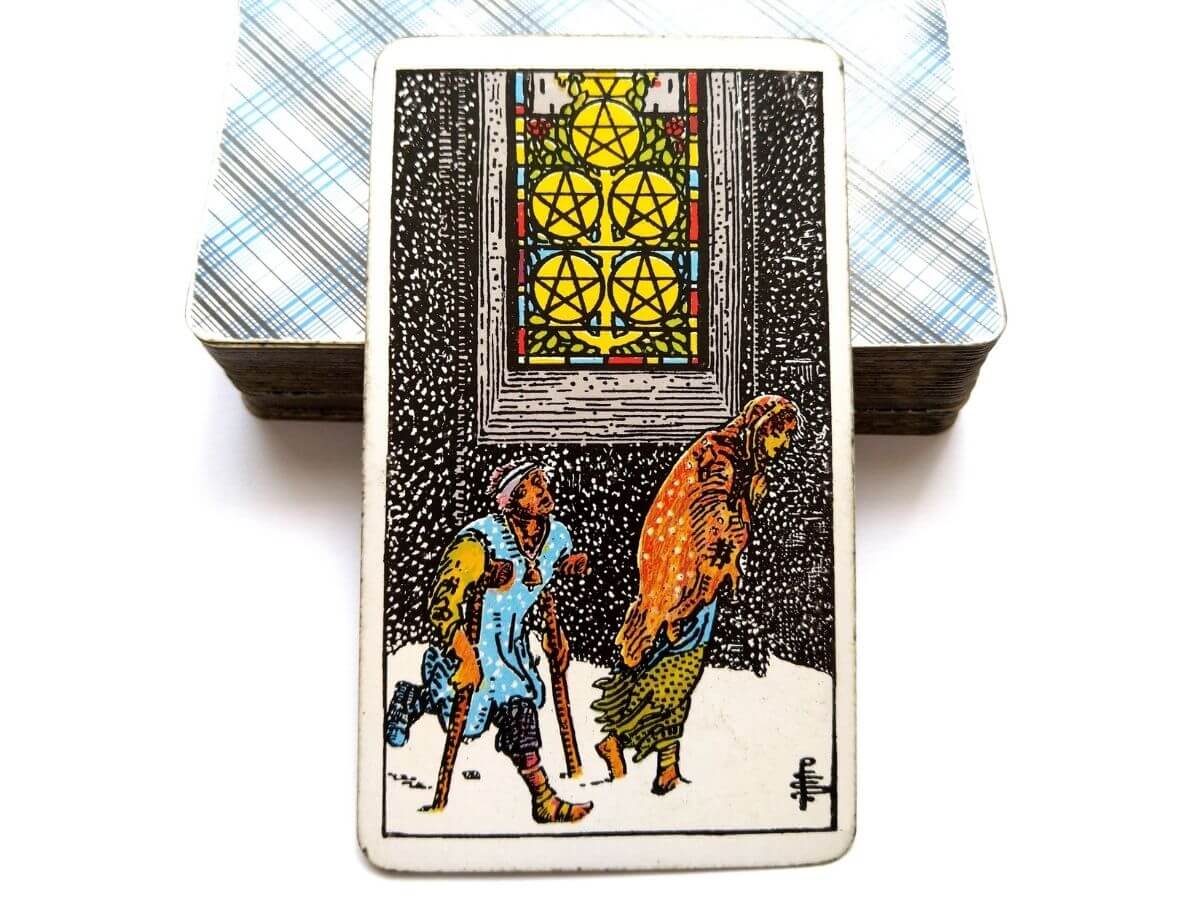