The symbolism found on this card is primarily drawn from mythology, alchemy and religious text.

“A dark, cloaked figure, looking sideways at three prone cups; two others stand upright behind him; a bridge is in the background, leading to a small keep or holding.”

What do The Knocked Over Cups Represent in The Five of Cups?

In this Tarot card, a man in a dark hooded cloak stares down at three fallen cups. The contents, which look like a fine Bordeaux red wine, are spilled at his feet. In his misery, he is too focused on his ‘bad luck’, to notice the upright cups behind him. These cups are a possible future source of happiness, and are a reminder that this sadness too shall pass.

In Rome, it was believed that spilling wine was an omen of bad luck and disaster, as ominous as a black cat crossing your path.

The knocked-over wine in this particular card symbolizes how the lone figure is feeling – perhaps he feels that life is a sad business or that he has just been dealt an unlucky hand.

In the Bible, at the Wedding of Cana, Jesus transformed water into wine for the guests, and thus the beverage became associated with purity. In the 5 of Cups, the wine has been knocked over, meaning purity over-turned. Perhaps the man feels abandoned, albeit temporarily, by Higher Powers.

What is The Symbolism of The Bridge?

Bridges have a variety of meanings in Tarot.

A bridge is inherently symbolic of communication, whether between heaven and earth or two different lands. It symbolizes a way forward, from one state to another, like an ascension process. A bridge is the end of one era, and the beginning of another. What is it about humans, but when we see a bridge, we have an urge to cross it?

In some cultures bridges represent information beyond perception. A bridge also offers a way to ‘cross over’ from this side of life to the next. Perhaps the man in this card has lost a loved one, and he is mourning their loss.

In Tarot, the bridge can also represent progress. Often a bridge is the only way to reach a destination and so it offers a portal to overcome obstacles. When a bridge appears in a Tarot card, it means that there is a way, when you are ready, to move beyond your present situation or personal state.

What Does The Castle Symbolize in This Tarot Card?

The castle traditionally represents home and safety. It represents arriving after a long and arduous journey. Maybe you had to study for years, battle with bad health or struggle to stay focused in order to arrive at this point.

In the 5 of Cups, our figure still has some walking to do before he reaches his castle. He must first walk along the riverbank and then take the bridge to cross the river. We do not know what difficulties might still await him on this journey.

Once home in his castle, we are reminded of the expression: An Englishman’s home is his castle. What you have struggled to acquire for yourself, no-one has a right to tell you what to do with it. Only when you walk the walk, can you talk the talk.

What is The Symbolism of The River?

Rivers in Tarot can represent an obstacle that you need to get past, something blocking your path or progress.

The river in the 5 of Cups is large and fast flowing, which means that the sadness may take some time to settle down and heal.

⭐A river also appears in these Tarot cards: Temperance, 8 of Cups, 10 of Cups, Knight of Cups, 4 of Wands and 8 of Wands

Why is The Man Wearing a Cloak, What Does it Mean?

Yes, a cloak symbolically allows us to hide our feelings or identity, much in the same way we might wrap a blanket around ourselves for comfort or to ‘hide away’ from the world for a while.

The Bible tells of a blind beggar called Bartimaeus. In Biblical times, beggars were given cloaks which officially gave them the right to beg. As the story goes, Jesus restored Bartimaeus’ sight, and the beggar then ceremoniously ‘threw off his cloak’, to indicate he was starting a new life. [Mark 10:46-52]

When the man in the 5 of Cups is ready to move forward, he will too throw off his cloak.

Why is The Sky Gray in the Five of Cups?

Skies are not just colored backgrounds in the Tarot. They are part of the story and reflect the central message in the cards. The sky in this card is dark and gloomy. We expect the heavens to open and the rain to fall at any moment. The rain symbolizes the tears which, perhaps, have yet to fall before the healing can begin.

What Sphere Does The 5 of Cups Represent in Qabalah?

In Qabalah (Kabbalah), the 5 of Cups depicts Geburah in Briah. Geburah is the fifth sphere in the kabbalistic tree of life and is associated with God’s judgement and punishment.

The Ultimate Guide to Five of Cups Symbols 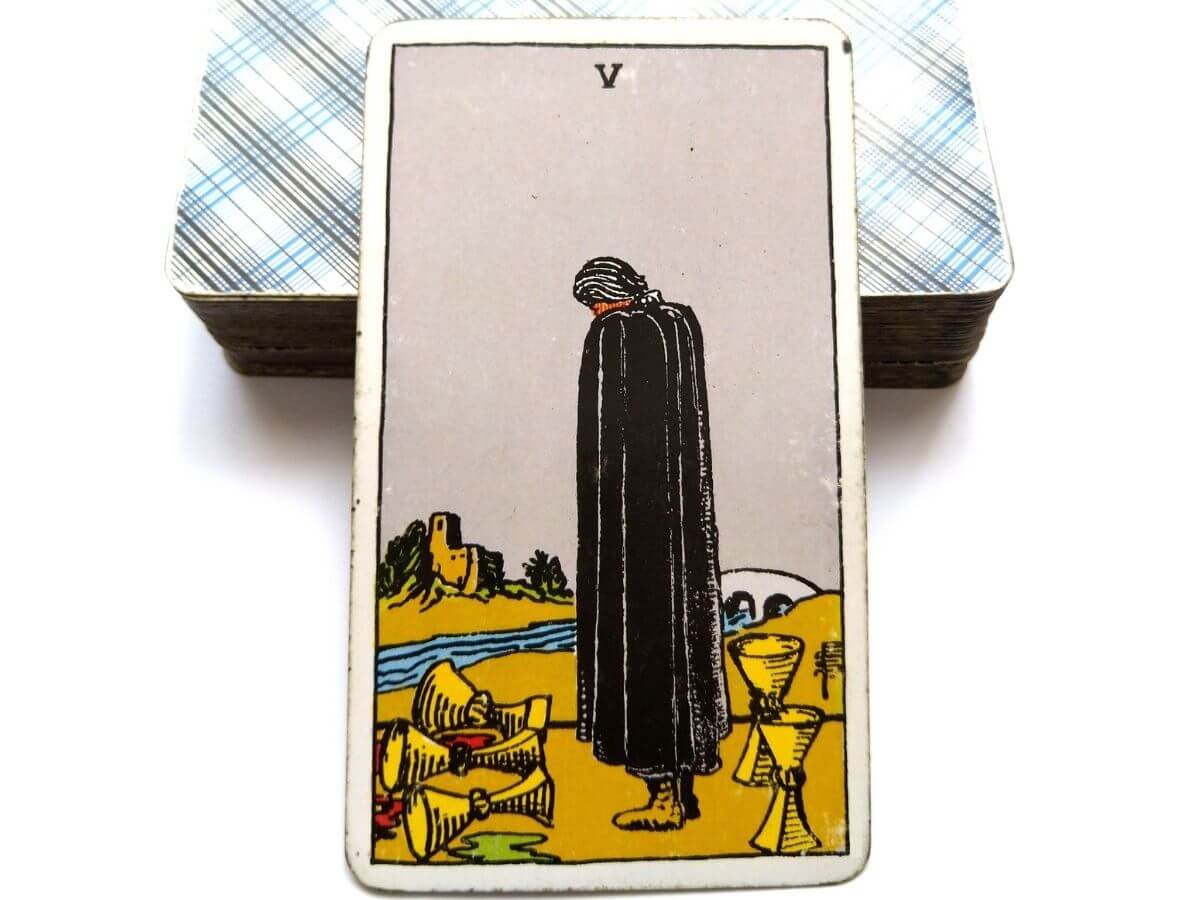