The symbolism found on this card is primarily drawn from mythology, art history, philosophy, metaphysics and western occultism.

“A woman, bound and hoodwinked, with the swords of the card about her. Yet it is rather a card of temporary durance than of irretrievable bondage.”

Why Is The Woman Bound With Ropes in The Eight of Swords?

A young woman stands loosely bound and blindfolded on a beach, with eight swords stuck in the ground forming a semi-circle around her.

The traditional cartomancy divinatory meaning for the 8 of Swords is ‘feeling trapped.’ However, according to Waite, such feelings are of a “temporary” nature. The woman does not look upset and her bindings could easily be cut with the edges of the standing swords.

In Tarot, the imagery of ropes is a symbol of restraint. Clearly the woman could not tie herself up, in this card, she must have been bound by others. The underlying meaning here, is that of feeling caged in or restrained by a person or circumstances.

Compare this to the Hanged Man, the only other card in the Rider Waite deck with a rope. In this Major Arcana card, the man has clearly tied his own foot to the tree, and does so voluntarily to master the art of restraint and patience.

In the Eight of Swords, one needs to ask – is the woman happy to be restrained or not? Our instinct, is to say of course not! She is just afraid to act, paralyzed by indecision or fear, and this may be true. On the other-hand, she may be pausing because she is trying to work out what she wants to do next, and this enforced pause is probably good because it forces her to think for herself. Too often we rush around without thinking. Swords in Tarot connect with the element Air, and represent thoughts and the mental world.

Here again, the Rider Waite-Smith deck is giving the reader a choice of which character to identify with.

What is The Meaning of The Blindfold in The Eight of Swords?

At a basic level, the blindfold indicates turning a blind eye, an unwillingness to face the truth or blocking out a situation.

The esoteric meaning of a blindfold is transformation from darkness (ignorance) to light (enlightenment). It represents being prepared in mind, as much as in body, before receiving access to the mysteries of the world. Many organizations, from fraternities to Freemasons, use blindfolds in rituals of initiations. The masons call it hoodwinking, and Arthur Waite himself describes the woman as “bound and hoodwinked.”

The purpose of the hoodwink, according to Masonic text, is not to conceal something from the candidate, but rather it symbolizes the fact that the candidate is yet in darkness, like the baby lying in its mother’s womb. Being in darkness the candidate prepares his inmost mind for those revelations that will be made to him after the hoodwink is removed.

Why Are The Swords Placed Upright in The Sand?

Eight swords stand upright, forming a semi-cage behind the woman, symbolically separating her from the castle in the background.

The swords are preventing her from ‘going back’, to the security of the castle. Castle life is easier and more predicable than life beyond the castle walls. It is only natural if our heroine struggled to step out of her comfort zone. This is why, she may in fact, welcome the enforced binding, or at least, doesn’t appear too quick to free herself. One feels she knows it is ‘good for her’, and will force the change she needs to evolve. Even if she returns to the castle, she may find that it has been transformed because she is seeing it with fresh eyes.

There may be a literary reference in this card to the legend of Ariadne on the Isle of Naxos.

Ariadne was the daughter of King Minos and she fell in love with Theseus of Athens. According to the Greek mythology, she ran away with Theseus, only to be later abandoned by him on the island of Naxos.

Love worked out for her in the end, however, she married Dionysus and ended up living on Mount Olympus, the official residence of the gods.

What is The Meaning of The Castle, Cliff and Sea?

In Tarot, castles symbolize dominion, which comes from the Latin domus, meaning home. This may be a physical home where you live or grew up. However, it could also be a mental place you visit in your head, a place, person or point in time that makes you feel loved and safe.

In the Eight of Swords, the castle may be the home our heroine is forcing herself to stay away from, in order to find herself. It may also represent future reward for any difficulties experienced now; her Mount Olympus.

Mountains and cliffs tend to represent ‘obstacles’ to overcome in Tarot. The closer the mountain, the more immediate the problem.

The cliff and mountain are shrouded in ocean mist, providing a sense of mysticism and magic. This scene could be a moment in time on the astral plane. We could even be witnessing bilocation, the ability to be present in two places at once, a skill usually attributed to saints. Our lady could be Joan of Arc, or a witch burnt at the stake.

In a Tarot reading, the appearance of the sea is meant to make us reflect on life.

What Sphere Does The Eight of Swords Represent in Qabalah?

According to Kabbalah, God (Ein Sof) made manifestations. Each manifestation is called a Sephirah (plural, Sephirot). Eights in Tarot connect to the eighth Sephirah, called Hod. Hod translates as splendor or glory. Hod is said to be the sphere in which the magician mostly works, and is associated with the solar plexus chakra.

According to the Hermetic Order of the Golden Dawn, Michael is the archangel who resides over the sphere. The order of angels that reside in the sphere are the Bene Elohim.

The Ultimate Guide to Eight of Swords Symbols 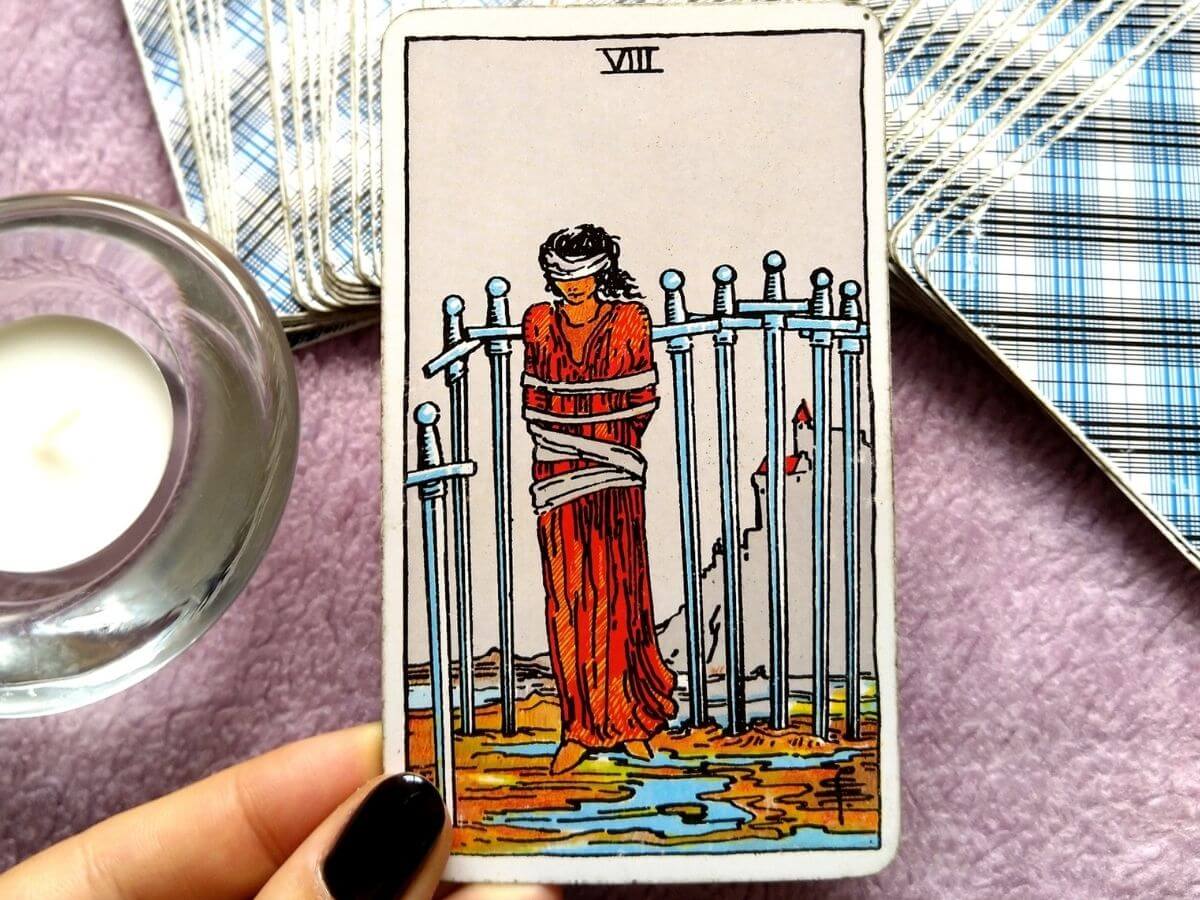