“A man of dejected aspect is deserting the cups of his felicity, enterprise, undertaking or previous concern.”

Who is The Figure Walking Away?

We see a figure walking away from us, towards the mountains. Perhaps this is the very same person that we saw previously in the Seven of Cups who had their back turned to us. In the Seven of Cups the person was confused by all the options before them, but now they seem to have settled on a choice and direction. To remain in the same place would have meant diminishing returns.

Notice the figure is wearing a red cloak? Red represents passion and motivation, which implies this person is now clear of mind and purpose.

Why is This Person Walking at Night-Time?

Tarot cards which depict night-time scenes, indicate that not all the facts are known. Darkness shrouds the path. It requires a leap of faith to walk in darkness if you can only see one step ahead at a time.

The person in the Eight of Cups is choosing to tackle the mountains at night-time, rather than waiting for the illumination of dawn. This suggests that he trusts Higher Powers to guide his path. He is relying more on instinct than logic.

In a Tarot reading, this card can mean you are right to trust your instincts at this time.

What is the Symbolism of The Moon and The Eclipse?

The Eight of Cups shows the sun being eclipsed by the moon. This is a reference to the card’s esoteric title, Lord of Abandoned Success. There is an implication of moving from light into darkness, from the known, into the unknown.

Only in the darkness can you see the stars.

Come and show me

8 of Cups Spell – by Karina

In Qabalah the moon is associated with the number 9, spiritually representing the first step upward in the journey of human evolution. In Alchemy, the moon is a partner in the human spirits quest for healing and magical union.

⭐The Moon also appears in these Tarot cards: The Moon card, Two of Swords, Seven of Swords, High Priestess card, Hierophant and The Chariot card.

What do The Mountains Symbolize in The Eight of Cups?

The key thing to remember about mountains is that they have a way of raising us beyond the ordinary. If you have ever stood on top of a mountain and felt that sense of infinity, you will know what I mean. They raise our soul to the heavens.

The mountains in this card act as a reminder not to get too bogged down in the day-to-day grind, but to allow time to create a vision for your future.

⭐Mountains appear in at least 25 cards in the Rider Waite deck. Here are a few more examples: Temperance, The Hermit and The Lovers

Does The River Have Any Symbolism in This Tarot Card?

Rivers in Tarot can represent an obstacle that you need to get past, something blocking your path or progress.

In the Eight of Cups, our hero has already crossed the river and is marching towards his new destination. This indicates that any difficulties in walking away from a situation have already been overcome. Any difficulties which lie ahead, indicated by the mountains, are connected to the future rather than the present.

⭐A river also appears in these Tarot cards: Temperance, 5 of Cups, 10 of Cups, Knight of Cups, 4 of Wands and 8 of Wands

What Sphere Does The 8 of Cups Represent in Qabalah?

In Qabalah (Kabbalah), the 8 of Cups depicts Hod in Briah. Hod is the eighth sphere of splendor and glory. It represents proceeding in an orderly way through what is chaos to others, and an appreciation of the sensitivity of nature. This sphere is ruled by Archangel Michael and associated with the solar plexus chakra.

The Ultimate Guide to Eight of Cups Symbols 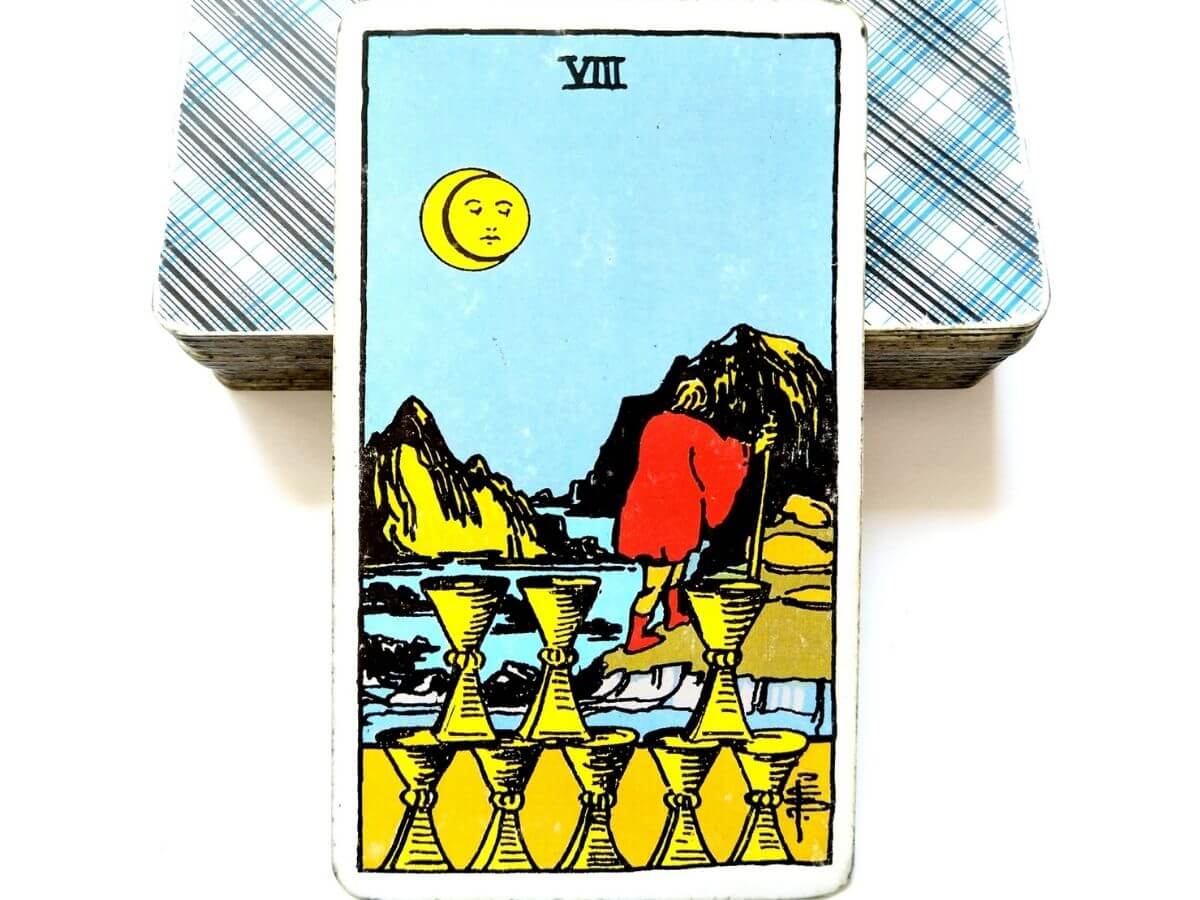