The symbolism found on this trump card is primarily drawn from mythology, esoterism, astrology and western occultism.

The iconography of the Death card in Tarot, traditionally centers on the image of a skeletal figure, or Grim Reaper. He either appears on a black horse (Charles VI deck c.15th century and Florence Minchiate Tarot deck, c.1860) or standing in a field surrounded by body parts (Lequart Marseilles Tarot, 1890).

In all cases, he wields a sickle or scythe, mowing down his victims, regardless of class, including kings, bishops and commoners.

A.E. Waite drew his inspiration from these historical decks, although he made some changes in accordance with Golden Dawn and Rosicrucian interpretation and symbolism. In the Rider Waite version, Death rides a black horse and wields no weapon.

What is The Meaning of The Horseman in Death?

The skeleton horseman represents the Grim Reaper, or Death, which comes to all: man, woman, child and king, without respect for status or station. Write writes, “The horseman carries no visible weapon, but king and child and maiden fall before him, while a prelate with clasped hands awaits his end.”

The skeleton refers to the fact that everything and everyone must die, in order that life may enter another form. The Reaper is also the personification of time, and that time inevitably introduces physical death and decomposition.

The rose is a symbol of Rosicrucianism, a European spiritual movement in the 17th century which studied esoteric knowledge of the ancient past. It was linked to the Freemasons. The Hermetic Order of the Golden Dawn, to which Waite belonged, was a spin-off of this society.

The five-petaled rose is the same rose that the Fool once held in his hand. It represents the individual’s unfolding consciousness, death, purification and resurrection.

The black armor Death wears is iron, the metal of Mars. Black indicates that Death’s destruction is deliberate and intended.

Death wears a red feather in his helmet. A similar red feather also appears in The Fool and The Sun, linking all three Major Arcana cards together. The feather marks the stages of moving through the three degrees of Freemasonry, from Entered Apprentice, to Fellowcraft, and Master Mason. The Fool is emergence, Death is rebirth and the Sun is enlightenment.

What is The Symbolism of The White Horse in The Death Card?

The white horse is a symbol of Spirit. Death is not evil, he works with Spirit. This indicates that change and transformation is a natural part of life.

The horse’s harness is embraided with skulls and crossbones. These are iconographic symbols of death, which originated in the Late Middle Ages and often appeared in funerary art.

The Death card in Tarot is associated with Scorpio, the zodiac sign symbolic of death, regeneration and past lives.

Who Are The People in The Death Card and What Do They Symbolize?

A king or emperor lies dead on the ground. He is the first to die, and his blue cloak appears to melt into a puddle of water, indicating decay has already set in. His crown is trodden on by the white horse, signifying the end of an era. Any predominating beliefs associated with this ruler’s time (king, government or institution) have outworn their usefulness.

The bishop or prelate appears to beg for his life, but he is about to be trampled down. He wears a miter (hat in the shape of a fish), denoting the Piscean Age. His demise reflects the end of the power of the church, as well as the end of the Age of Pisces, and the dawn of the Age of Aquarius.

The infant child kneels, praying to Death not to take him. He even holds out a posy as though this could stop the march of death. The child represents spiritual immaturity, and wishful thinking.

The young woman looks away and refuses to look Death in the eye. Her reluctance is symbolic of the subconscious mind which is reluctant to release old ideas and habits.

Waite writes, “Between two pillars on the verge of the horizon there shines the sun of immortality.”

Once a person walks past the twin towers, they are in the land of eternal life. The rising sun in the eastern horizon, represents Heaven and the afterlife.

The twin towers represent what is ‘known’. Beyond their border stretches the unknown and the afterlife. We all try to push back at those towers, beg God even, to delay our journey beyond their wall.

In the background, a river flows towards the sea. This passage of water represents the flow of life towards death.

The river may be symbolic of the Styx, the river that forms a boundary between Earth (Gaia) and the Underworld.

A small boat or ship with a red sail, floats along the river. This could be the ferryman Charon, who according to Egyptian mythology, transports the souls of the newly dead across this river into the Underworld.
⭐Charon also appears here: Six of Swords symbols 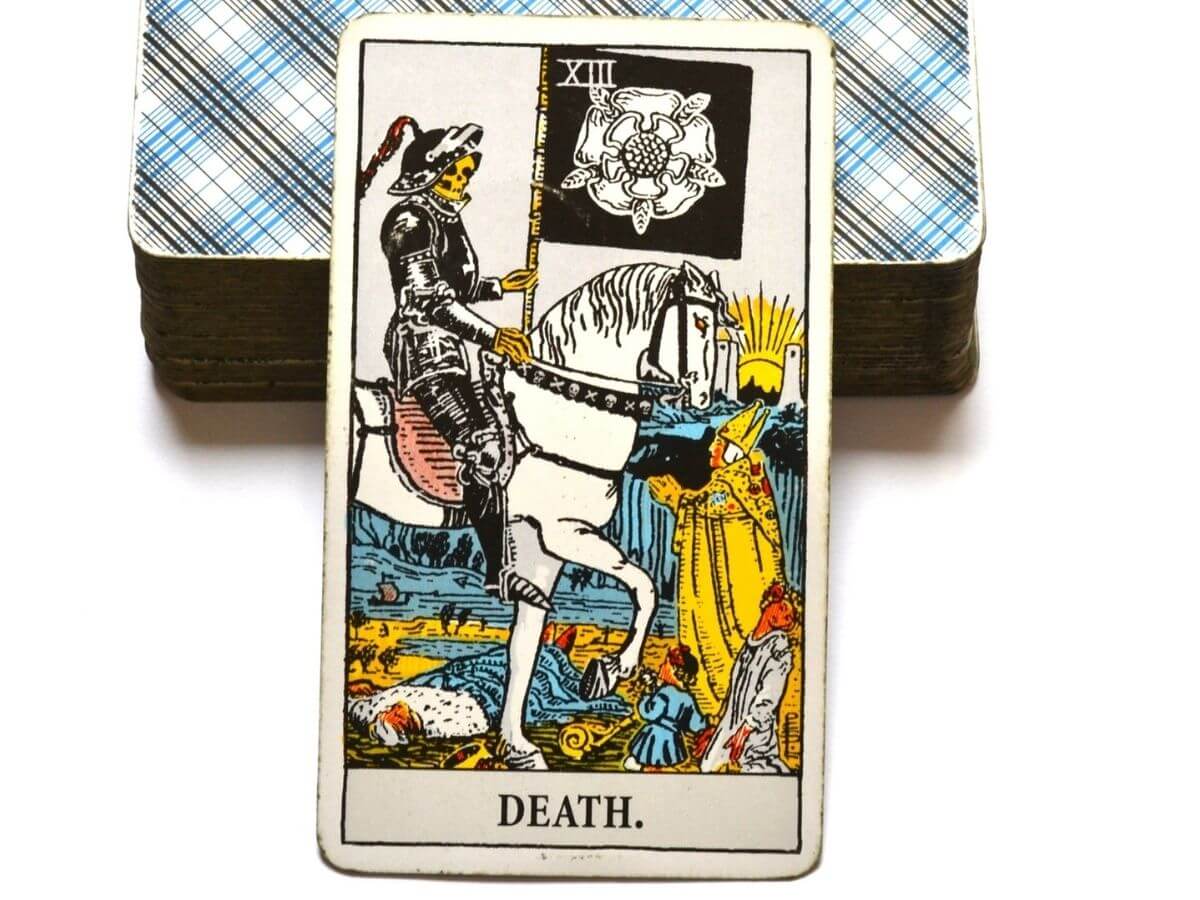