The symbolism found on this card is primarily drawn from mythology, religious text and alchemy.

“A hand issuing from a cloud grasps a stout wand or club.”

What Does The Wand Symbolize in The Ace of Wands?

The sturdy wand in this card is reminiscent of a caveman’s club, a weapon to be wielded as a symbol of strength, vitality and energy. This ‘club’ is symbolic of primordial energy, the power of the Divine which lies within us all. Yogis call this power Kundalini, and view it as a sleeping, potential force which, coiled at the base of the spine, can be released with meditation and other yogic movements.

At the command of the yogi in deep meditation, this creative force turns inward and flows back to its source in the thousand-petaled lotus, revealing the resplendent inner world of the divine forces and consciousness of the soul and spirit. Yoga refers to this power flowing from the coccyx to spirit as the awakened kundalini.

The wand has three branches of green shoots, representing new growth and early signs of manifestation. There are 4 leaves on the top branch, and 3 leaves on the left- and right-hand branches. In total there are 10 leaves, which correspond to the 10 Sefirot of the Kabbalah, or Tree of Life. The Sefirot (also called sephirot and sephiroth) represents the ten channels through which the Divine source (Ein Sof) reveals His guidance to mankind.

What is The Meaning of The Yods or Falling Leaves?

Several leaves fall from the wand. These leaves appear to be in the shape of the Hebrew letter yod (pronounced ya). Yod has a numeric value of 10, and according to the Jewish mystical tradition, the yod represents the first letter of the Holy Name. Yod is the smallest of the Hebrew letters, a mere dot which is used to form all other letters. It is considered the building block of creation and thus represents God’s omnipresence.

There is a sense of the alchemist about the yods in this card, one is not sure if they are falling from the wand, or magically rising up from the land below. We may, in fact, be witnessing a miracle. Yods appear in a similar manner in the Ace of Cups, as drops of water and as flames in the Ace of Swords.

Yods signify that the hand of God is at work.

⭐The Hand of God also appears here: The Tower Symbols

Who’s Hand is Emerging From The Cloud?

The white radiating hand emerging from the cloud is usually considered the Hand of God. We are witnessing the beginning of a paranormal materialization or apparition, the appearance of someone or something out of thin air.

In the Rider Waite deck, the author A.E Waite, asks us to consider the gesture of the hand. In the Aces of Wands and Swords, the hand is upright and the fist is closed. This is an active gesture which indicates one should ‘grab’ what is on offer, or ‘make it happen’ by taking some action. Compare this to the Aces of Cups and Pentacles, where the palm is open and facing upwards, implying you should be open to ‘receiving’ what is on offer.

The sea is His, for it was He who made it,

And His hands formed the dry land.

Clouds have a variety of meanings in Tarot, depending on their color and type. The clouds in the Ace of Wands are dark and swirling, which suggests difficult or confusing times. Now however, you are urged to take some action. This card really implies: God helps those who help themselves.

What is The Meaning of The Trees, River and Mountains in This Tarot Card?

Rivers in Tarot can represent an obstacle that you need to overcome.

The river in the Ace of Wands lies some way in the distance, indicating that there is nothing much to worry about at this point. Just grab your wand and run with the opportunity before you. Interestingly, we have an aerial advantage in this card, we seem to be floating in the sky, providing us enough scope to ‘look ahead’ and see the peaceful valley below.

Perhaps you have tapped into your kundalini energy and used it for the purposes of astral travel, levitation or transvection (ability to fly by magical means).

Mountains also represent obstacles to overcome in the future. When in the future, depends on how far away the mountains are in the distance. The further away, the further away the problems. In the Ace of Wands, the mountains are way in the distance. One need not worry about them today. However, one suspects that by the time you reach those mountains, your life or mindset will very much have changed, and therefore any concerns you can conjure up, are unlikely to even be relevant by that stage.

Trees represent growth, and plans for the future in Tarot. There are a handful of trees in this card, indicating that the future is still a bit ‘hazy’.

⭐Mountains appear in at least 25 cards in the Rider Waite deck. Here are a few more examples: Temperance, The Hermit and The Lovers

Why is There a Castle in The Ace of Wands?

The castle traditionally represents home and safety, and arriving after a long journey.

This castle in this card acts as a motivator, the Hand of God promises you a place to ‘settle’ or rest your head at the end of the day. Knowing this, you can bravely set out on your journey. In a metaphysical sense, the castle can also represent a location or place where opportunities may grow in future.

What Does The Ace of Wands Represent in Qabalah?

In Qabalah (Kabbalah), the Ace of Wands depicts the seed or root of elemental Fire. Kether of Fire, or Kether in Atziluth. You are opening up a new point of view, positing a new sense of identity.

The Ultimate Guide to Ace of Wands Symbols 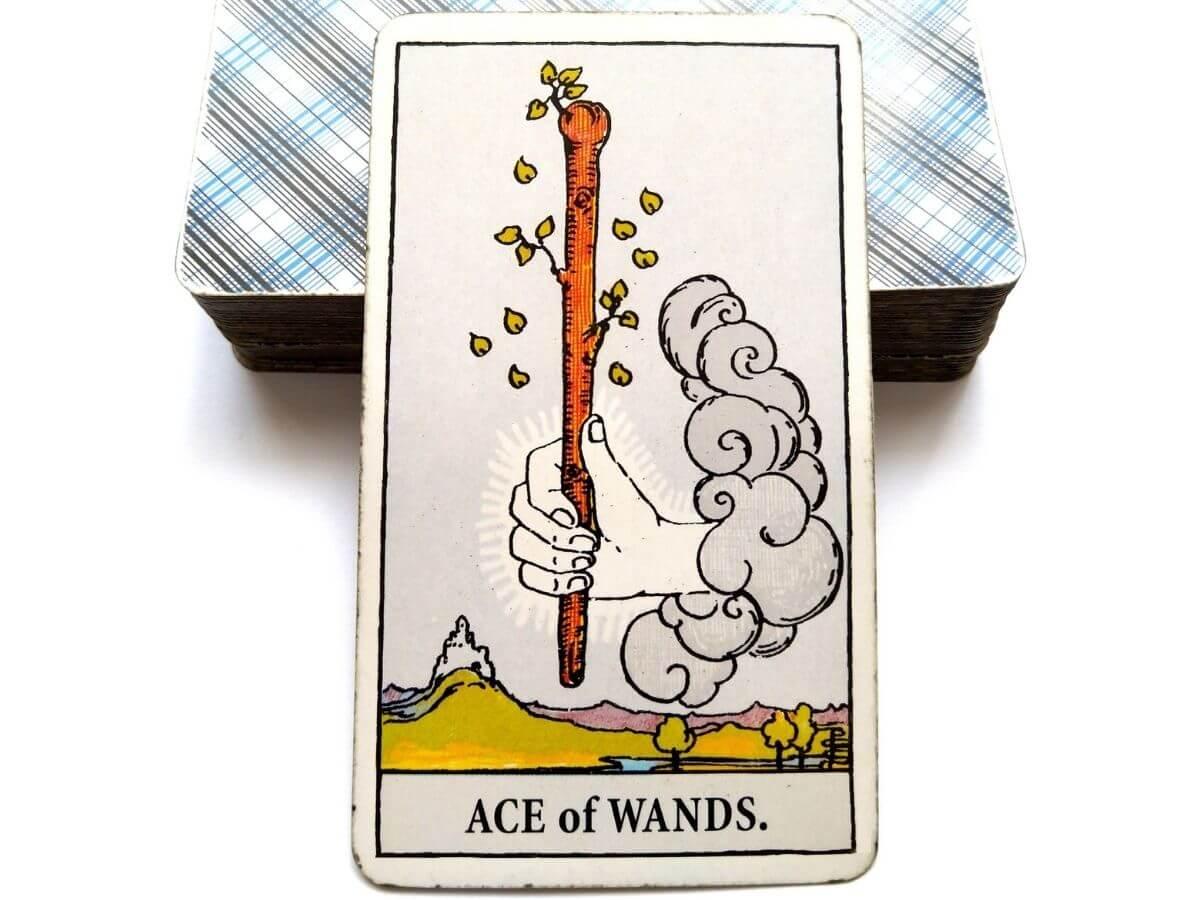