The symbolism found on this card is primarily drawn metaphysics, western occultism and religion.

“The crown may carry a much higher significance than comes usually within the sphere of fortune-telling.”

A.E. Waite
The Pictorial Key To The Tarot

Imagery of the Ace of Swords: Discover the hidden meanings, metaphors, symbol and allegory

What Does The Hand Symbolize in The Ace of Swords?

The white radiating hand emerging from the cloud is usually considered the Hand of God, or sometimes an angel.

In the Rider Waite deck, the author A.E Waite, asks us to consider the gesture of the hand.

In both the Ace of Swords and Ace of Wands, the hand is upright and the fist is closed. This is an active gesture which indicates one should ‘grab’ what is on offer, or ‘make it happen’ by taking some action. Swords and Wands represent Yang energy, and the forceful masculine elements of Air and Fire.

In the Aces of Cups and Pentacles, the palm is open and facing upwards, implying you should be open to ‘receiving’ what is on offer. Cups and Pentacles are Yin energy, and represent the receptive feminine elements of Water and Earth.

The fist in the Ace of Swords is reminiscent of Caesar’s thumb, or Pollice verso in Latin. A thumbs up means approval and downwards dictates disapproval. Here the fist is facing upwards, indicating clear and positive feedback.

Notice how the thumb is hidden behind the sword? Anything ‘hidden’ in Tarot is a symbol of mysticism, the spiritual realm, psychic and premonitions. The hidden thumb suggests knowledge gained by flashes of insight, the signature of inspiration which comes from outside you. Thus you are guided to listen and trust your instincts. Your first thought, is your best thought. It is the awakening of consciousness.

What is The Meaning of Crown on The Sword?

A diadem crown rests on top of the sword, a symbol of royalty and crowning glory. When a crown is paired with a sword, it usually indicates that a victory has been won after some effort. This is a ‘winning’ idea, offer or proposal, for example.

There may also be a reference here to the cross and crown, a symbol used by Christians to signify receiving one’s reward in heaven. The crown represents the rewards which come after the trials (the cross) of this life.

The symbol of cross and crown is also associated with Freemasonry, specifically the Knight Templar.

A palm branch hangs from the right side of the crown (as you look at the card). The palm represented immortality in ancient Egypt and was sacred in many religions. In Christianity, the palm is associated with Jesus’ triumphal entry into Jerusalem and is celebrated on Palm Sunday.

In ancient Rome the palm was a symbol of victory, and even in Christianity, it can symbolize the victory of the spirit over flesh.

An olive branch hangs from the left side of the crown, a classic symbol of peace.

What Do The Flames or Yods Surrounding The Sword Symbolize?

There are six flames surrounding the base of the sword. These flames are found in other cards in the Rider Waite deck. They appear to be in the shape of the Hebrew letter yod (pronounced ya). According to the Jewish sages, the yod represents the world to come and completeness.

Here, the yods represent the flames of Spirit and the creative seeds of thoughts and ideas emanating from the spirit world.

As Elizabeth Gilbert, author of Eat, Pray, Love suggests “It is only through a human’s efforts that an idea can be escorted out of the ether and into the realm of the actual.” She says “Ideas are a disembodied, energetic life-form. Ideas have no material body, but they do have consciousness, and they most certainly have will. Ideas are driven by a single impulse: to be made manifest.”

What is The Symbolism of The Barren Landscape in The Ace of Swords?

The barren and dry landscape in this card signifies that the victorious thought or idea does not come from an earthly source below, but from the Heavens above. The symbolism is emphasized by our vantage point. As the viewer, we appear to be floating in the sky, looking down on the mountains below.

In Tarot, mountains symbolize obstacles to overcome. Our higher vantage point means we can now see the ‘bigger picture’ and thus the ideas can flow freely.

What Sphere Does The Ace of Swords Represent in Qabalah?

Qabalah or Kabbalah is a system of Jewish mysticism which attempts to explain the nature of the Universe. It embraces God, angels, devils, letters of the alphabet and numerology.

According to Kabbalah, God (Ein Sof) made manifestations. Each manifestation is called a Sephirah (plural, Sephirot). Aces in Tarot connect to the Crown Sephirah, the topmost of the Sephirot and Tree of Life, known as Kether.

According to the Hermetic Order of the Golden Dawn,  Eheieh is the God associated with Kether and Metatron is the archangel who resides over the sphere. The order of angels that reside in the sphere are the Holy Living Creatures.

Chakra Associated With The Ace of Swords

The Crown Chakra, or Sahasrara is associated with the Ace of Swords. This energy center controls your connection to the spiritual realm, and your sense of enlightenment, as well as life purpose gifts such as mediumship and clairvoyance.

The Ultimate Guide to Ace of Swords Symbols 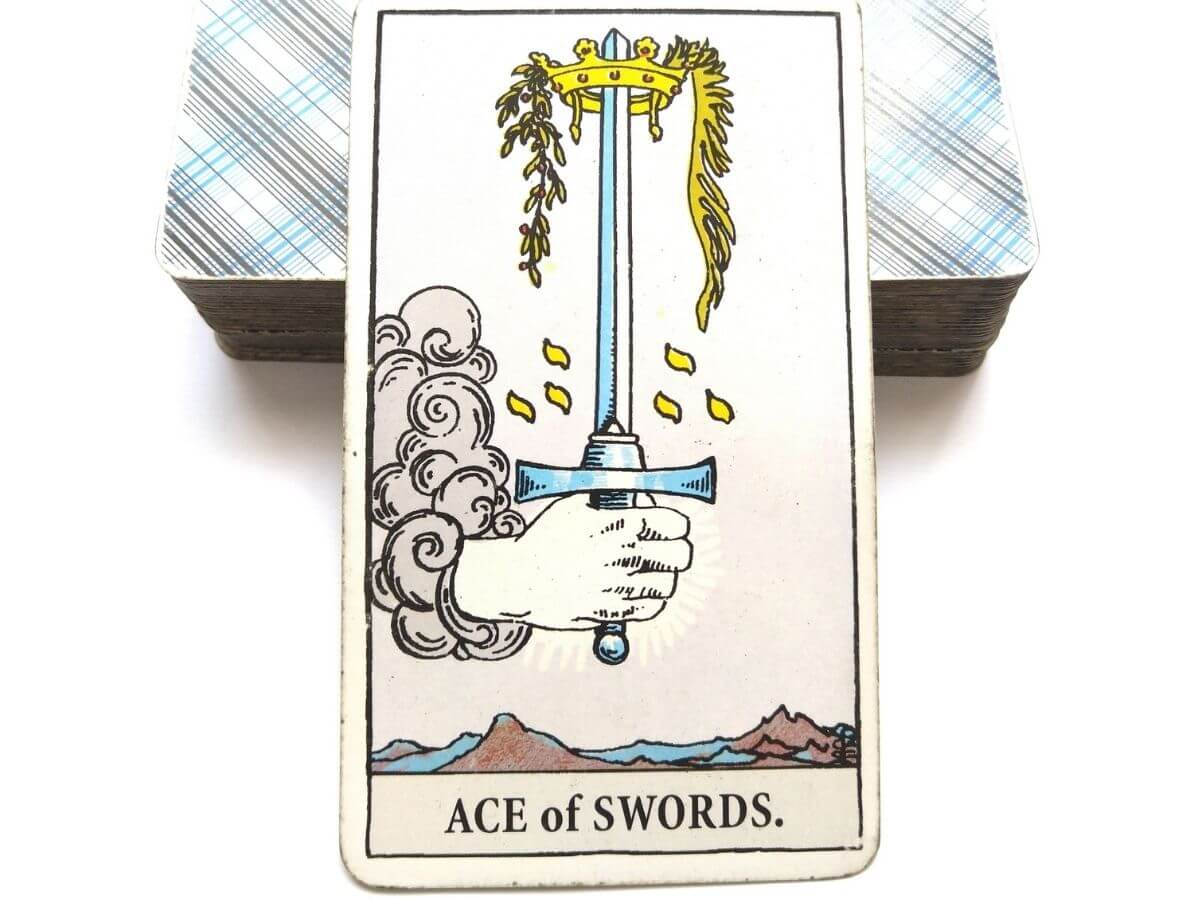