The symbolism found on this card is primarily drawn from mythology, alchemy, metaphysics and western occultism.

What Does The Hand Emerging From The Clouds Symbolize in The Ace of Pentacles?

A white angelic hand glowing with radiance emerges from the cloud. The hand is gently holding a large pentacle inscribed with a pentagram.

Clouds separate what is above from below. Spirits live above the clouds and ordinary life below. The hand emerging from the cloud is thus delivering a divine gift from the invisible world. This may be the hand of God or an angel. The Ace of Pentacles as such, represents the physical manifestation of luck in the material world, for example, in the form of money or property.

Clouds have long been associated with divination. Aeromancy is the name given to reading signs and omens in the sky. Cloud divination is specifically called nephomancy and involves scrying with the shapes and movement of the clouds. Nephomancy was popular with Celtic druids and seers, and there are old records indicating that the practice led to accurate premonitions and predictions.

The presence of clouds in this card reminds you, not to neglect the hidden world in your pursuit of money, and worldly success. Tuning into your extrasensory perceptions (ESP) can provide you with all sorts of knowledge about possible future events and opportunities. ESP experiences may occur in dreams, but can also be induced through meditation (such as cloud gazing), trance and spontaneous waking visions.

The palm is open and receptive, like the feminine element Earth (pentacles) and Water (Cups). This open palm directs you to stay open to whatever offers come your way. In contrast, in the masculine elemental suits, the hand grips the Ace of Swords and Ace of Wands, indicating a more proactive stance is required on your part to bring those opportunities to life.

What is The Meaning of The Garden?

What does the garden mean in Tarot?

The Hand of God is hovering above the garden, as though to announce – here is your Eden! While you may be making plans and looking ahead, don’t forget to pay attention to whatever is happening in the present moment (mindfulness). The garden or balcony you sit on, the sun shining on your face and the sounds of nature. The beauty of God’s creation.

An archway leads us from the garden, out to the world at large. This implies we must eventually leave the safety and comfort of the garden, in order to experience more in life.

Passing through an arch is symbolic of leaving the old behind and entering a new phase. Traditionally archways also marked access to a holy place. If you wanted to buy a house, and you receive the Ace of Pentacles, this card can mean you are about to find your sacred place or garden of Eden.

The rose appears by itself in many cards in the Rider Waite deck. However, wherever you find a lily, you will always find a rose.

In the Ace of Pentacles, we see cultivated lilies of the valley growing in the garden. Small Red roses grow wild on the hedge which separates the manicured lawn from the valley beyond.

The lily’s cup shape is symbolic of female ‘receiving’, and the miraculous impregnation of goddesses, such as the Virgin Juno and Virgin Mary. The red rose is a symbol of the heat of passion of the real world.

We are reminded that blissful innocence is a temporary state, and that there will always be new experiences to tempt us into unknown territory.

⭐A lily and rose also appear here: The Magician Symbols, Hierophant Symbols, 2 of Wands Symbols and King of Pentacles Symbols

What is The Meaning of The Path and Mountains in The Ace of Pentacles?

Paths represent the journey of life, both the practical and spiritual journey we travel.

When a path appears in a Tarot card, it suggests the beginning of a new adventure. It suggests a desire to move beyond your present lifestyle and what you have experienced to date. You could be moving location, job or beginning a college course.

Or it could be the path of saints, yogis and sages. The path towards enlightenment, a theme which runs through Buddhism, Christianity, Judaism, Gnosticism and Hermeticism; and later in the Freemasons and Golden Dawn.

The path in the Ace of Pentacles invites you walk towards the mountains in the distance. How long this path is, or where it will lead is anyone’s guess, but it holds the promise of new experiences.

The key thing to remember about mountains is that they have a way of raising us beyond the ordinary. If you have ever stood on top of a mountain and felt that sense of infinity, you will know what I mean. They raise our soul to the heavens. This is the path of awakening that everyone feels drawn to sooner or later.

What Sphere Does The Ace of Pentacles Represent in Qabalah?

Qabalah or Kabbalah is a system of Jewish mysticism which attempts to explain the nature of the Universe. It embraces God, angels, devils, letters of the alphabet and numerology.

According to Kabbalah, God (Ein Sof) made manifestations. Each manifestation is called a Sephirah (plural, Sephirot). Aces in Tarot connect to the Crown Sephirah, the topmost of the Sephirot and Tree of Life, known as Kether.

According to the Hermetic Order of the Golden Dawn, Eheieh is the God associated with Kether and Metatron is the archangel who resides over the sphere. The order of angels that reside in the sphere are the Holy Living Creatures.

The Ultimate Guide to Ace of Pentacles Symbols 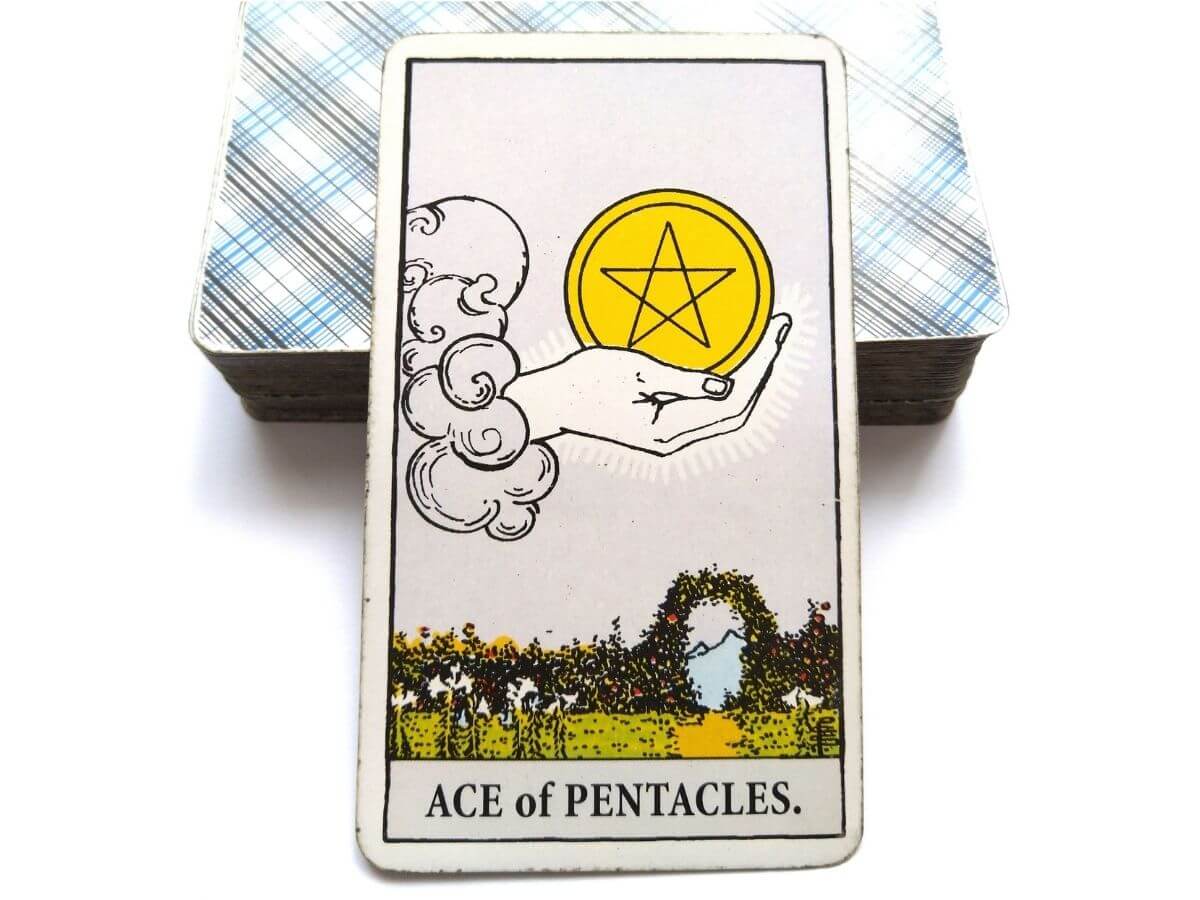